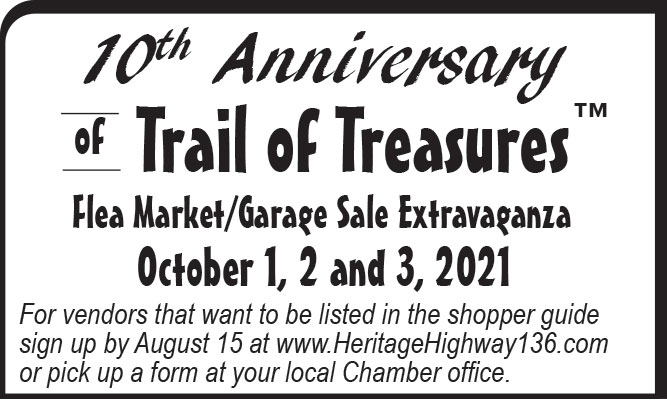 Shoppers sharpen your bargaining skills and mark your calendars for October 1, 2 and 3, 2021.

Trail of Treasures™ is celebrating their 10th Anniversary this year.  The Flea Market/Garage Sale Extravaganza across Southeast Nebraska extends from Missouri on the East to Colorado on the West.

Started in 2012, Trail of Treasures™ is now a 370-mile continuous yard sale across southern Nebraska.  Last year,  people from Canada to Texas and California to Indiana attended the event, which helps bring people and thousands of dollars to small towns along the route, thereby helping local economies.

Trail of Treasures™ committee members invite antiques buyers, flea marketeers and others to travel U.S. 136, also known as Nebraska’s Heritage Highway and Nebraska 6 and 34 across the state.

A great economic development tool, this event brings people to the many small communities in southern Nebraska to spend dollars and visit the interesting and varied attractions and scenery along the way.

Sharon Priefert, executive director of the Fairbury Chamber of Commerce, is looking forward to a bigger and better event than last year.  If you drove around the Fairbury area last year you saw plenty of vendors and lots of antiques. Some people were pulling trailers and made a weekend of it, she said.  “The antiques seem to be a real drawing card,” Priefert said.

For the past several years, the participation was primarily in Johnson County/Tecumseh.

Those who venture out to the Trail of Treasures™ will find everything a flea market has to offer and much more. Vendors, including church and community groups, will have food stands along the route.

The Trail of Treasures™ Committee is wanting to get the word out early because vendors that want to be listed in a shopper guide have until August 15 to sign up.

The goal of Trail of Treasures™ is to promote tourism and provide a boost to the local economies.

For Vendor Registration and Advertiser information go to:  www.HeritageHighway136.com or pick up a form at your local Chamber office.