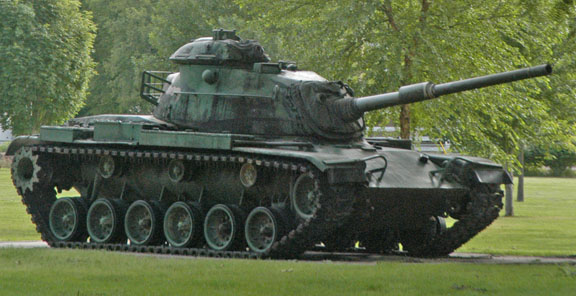 Fairbury Rotary has launched a project to clean and paint all three historic military tanks in our community, with an anticipated total cost of approximately $9,000. Rotary is seeking donations to assist in this project.

Rotary District 5650 offers grants to local Rotary clubs annually, and Fairbury Rotary applied for and successfully received a $1,500 district grant for the project. The Fairbury Rotary Club has also committed at least $1,500 to the project. With a total cost estimated at approximately $9,000, the Fairbury Club is seeking donations to help with the project.

“Rotary is a community service organization, and we felt painting our community’s three tanks would honor veterans, enhance the historical value of the tanks, and enhance the look of our community,” said Fairbury Rotary President Lana Likens.

The estimated cost includes approximately $7,700 for power washing and painting by Tom Nelson Painting; approximately $1,000 for signage to help give some history of the tanks; and about $300 for potential other supplies needed.

Since Fairbury Rotary is not a 501(c)(3) organization, those who would like donations to qualify as a charitable donation for tax purposes should make their donations to the Fairbury Civic Foundation, PO Box 172, Fairbury, NE 68352. The Fairbury Civic Foundation will hold funds for the project until they are needed. Donations may also be made to Fairbury Rotary, c/o Tiffany Pfaff, 2811 E St., Fairbury, NE 68352 (if the donor is not seeking the donation count as a tax-deductible gift.)

Power washing of the tanks began Aug. 6. Painting is expected to begin soon.

There are no posts