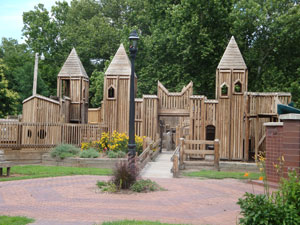 The Fairbury City Park plays host to the largest flea market in Nebraska, The July 4th Flea Market. Each year during the July 4th holiday, thousands of visitors come to the Fairbury City Park to shop the hundreds of vendors displaying their goods. At the July 4th Flea Market you’ll find everything from antiques, collectibles, furniture, new merchandise, architectural pieces, not to mention a huge variety of food and beverages. The flea market starts at dawn, and features a Shriners Parade at 10 am. The day ends with a huge fireworks display at dusk.

Located on the southwest side of the Fairbury City Park. The Frontier Fun Park is the first of its kind in the state of Nebraska, built in 1995 and funded entirely by community volunteers. If you have children, this is a stop along the Trail that you won’t want to miss. Constructed entirely of wood at the hands of Fairbury locals, this fantasy playground recreates the excitement of a pioneer town in the Old West.

The Fairbury Municipal Swimming Pool was built in 1946 and refurbished in 2009. The Fairbury Pool measures 150′ X 50′ approx. and holds 300,000 gallons of water. The depth ranges from 3 ft in the shallow end to 12 ft in the deep end. The Fairbury Pool features two wading pools for small children, two waterslides and two diving boards. The pool is fully-staffed with a minimum of two lifeguards on duty at all times. There are showers, restrooms and lockers available to store clothing and valuables. There is a concession stand and a picnic shelter/gazebo on site.