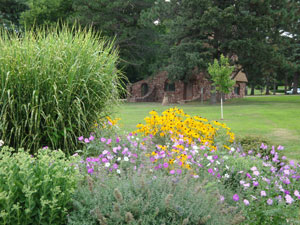 In 1920, the city purchased a block and a half of ground between 12th & 13th streets from J to the alley between H and I streets to be used for a park. Known as Highland Park, it furnished a playground for children and a picnic spot.

In 1933, W.F. Cramb was chairman of the Park Board. Highland Park, as well as the city park and Crystal Springs, was included in various WPA projects. Cramb drew the plans for the Boy Scout cabin (which still stands) in the park and oversaw the construction of the outdoor sanctuary to be used for religious meetings.

The sanctuary was formed by placing rocks as seats at intervals in the banks of the sloping sides of the draw which runs through the park, forming a natural amphitheater, semicircular in shape, with a little stone alter placed at the bottom of the draw and directly in front of these seats. A novel fountain resembling a totem pole and a large stone shelter house were all projects undertaken.

Mrs. Sylvia McNish, who died in October 1935, bequeathed some lots to the city to be used for a children’s playground and for park purposes; also a cash bequest was made. On June 8, 1941, the park was dedicated. The name of Highland Park was changed to McNish Park, and a perpetual flower bed was placed at the east side of the park in memory of Mr. and Mrs. McNish.

Most of the original structures remain today making the park an outdoor sanctuary. A disc golf course and playground equipment, along with many beautiful trees and flowing water make this park one of Fairbury’s finest.

The Fairbury Disc Golf Course was constructed in 1999.

What Is Disc Golf?

Disc Golf is played much like traditional golf. Some of the rules are the same; however, the “hole” is not a hole in the ground, but a metal basket with chains or a “disc pole hole.”

Disc Golf courses are typically 9, 18, 27 or 36 holes long and almost all courses are free.  There are no green fees, caddies, or club dues. Disc golf makes use of the natural terrain as part of the disc golf course design.

Disc Golf is growing in popularity. It is economical, eco-friendly and promotes fitness for all ages. If you can throw a Frisbee, you can play disc golf.

Today there are over 2,500 Disc Golf courses in the United States. Over 10 million people play the game and there is even a Professional Disc Golf Association. Pro Players compete in tournaments all over the world.

The positive experience with Disc Golf and the growing demand has led to the expansion of the sport in Fairbury and the surrounding communities.