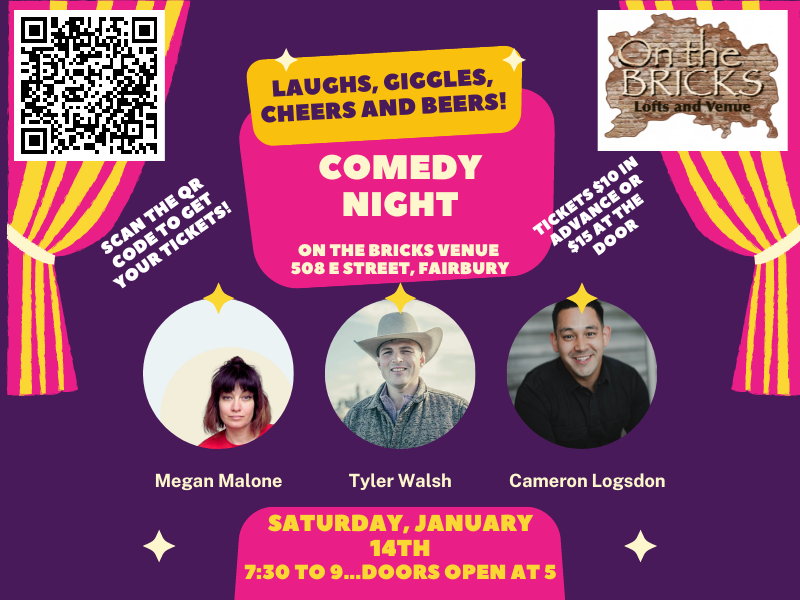 With a dip in his lip and a glint in his eye, Tyler Walsh has quickly emerged as a unique, singular comedic voice in the Midwest and beyond. He has traded in rodeo clown barrels and donkey basketball games to stages with Noel Miller, Larry the Cable Guy and the like. This son of Iowa, born in Mapleton rural, made in Dayton, takes his unique experiences and makes them relatable to crowds of any persuasion. His slow drawn yet sharp sense of observation reels people in from urban rooms to grain bins. From stages across the country to one near you, Tyler will leave you saying you saw him when.

﻿Cameron Logsdon is one of the fastest rising comedians in the Midwest. Cameron’s earned millions of views on social media for his celebrity impressions and short videos parodying everything from politics to pop culture. In 2016, he was selected for NBC’s Late Night Writer’s Workshop, a program aimed at helping writers of diverse backgrounds. In 2022, he was named Best Comedian in Omaha by the Omaha Entertainment and Arts Awards. He has also hosted/produced his own live late-night-style comedy show and performs regularly at The Funny Bone Omaha as well as clubs, colleges, festivals, and corporate events all of which help pay off his student loans. Cameron is a mixed-race minority that grew up in the Midwest, was a teen father, and draws from his personal experiences to shape his stand-up comedy and social media content which you can check out @CameronLogsdon on TikTok, Instagram, and YouTube.

Megan Malone is a stand-up comedian, writer and producer from Omaha, NE. She started stand-up comedy in 2017 to test dialogue for a script and has been performing ever since. Megan draws on her experience growing up in a large, Catholic family in the Midwest to deliver wry observations about life and, well, dogs mostly. Her work has been published in Found magazine, on Current TV, IB5k.com, and Good Magazine. Megan has recently shared stages with Adam Cayton-Holland, Jono Zalay, and Casey Crawford and produced shows featuring national headliners Mary Mack and Amy Miller. Please do not ask her to do quick math.